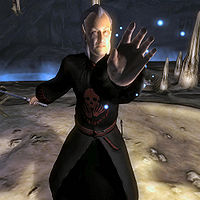 Mannimarco, an Altmer necromancer, is the arch-nemesis of Vanus Galerion and the Mages Guild as well as being the leader and founder of the necromancer cult, The Order of the Black Worm. With members of the guild leaving due to Arch-Mage Traven's stance on Necromancy, he has used this division to gain followers and launch an all-out attack against the Mages Guild in Cyrodiil.

He can be found in Echo Cave, although only while the related quest is active. Once there, he will simply wait in his current position, in Echo Necromancer's Chamber, never even eating or sleeping.

He wears the unique but unenchanted King of Worms' robes. He is armed with a silver dagger and a unique artifact: the Staff of Worms. In addition to the latter, Mannimarco is associated with two other Elders Scrolls artifacts, both which appear in Oblivion: the Necromancer's Amulet and the Bloodworm Helm; the first was actually created by Mannimarco. However, he lost possession of both artifacts to the Mages Guild.

In addition to these weapons, Mannimarco also has powerful magic at his disposal. He has a unique birthsign that provides him with permanent +100 Fortify Health, +20 Intelligence, 50% Resist Magic, Normal Weapons, and Paralysis. He is able to cast the Expert-level spells Immobilize and Lightning Ball, the Master-level spell Summon Lich, and five random, leveled Necromancer spells.

As soon as you arrive in the Echo Necromancer's Chamber, he will immobilize you and start the following dialogue: "I see Bolor was unsuccessful in delaying you. Very well. I shall reanimate him once we are done here. Perhaps we shall chat for a while, since you really have no other options? I must say, I expected Arch-Mage Traven, rather than his star pupil. I am disappointed to see that he could not face me himself. I have met so many of his predecessors over the years. I developed a particular fondness for Galerion, ill-preserved though he may be. But here you are instead. Skilled enough to make it this far, which speaks volumes about you. Perhaps you'll be as useful to me as Traven would." If you say "I'll never help you!" He will say "Oh, my dear, I didn't mean to imply that you have a choice. I will make you another in a long tradition of Worm Thralls, and take my time in studying you. Your very soul will be forfeit to me."

If you say that you'll serve him if only by having your life spared he'll say "I'm afraid you misunderstand. I already have more servants than I need. Your body will be preserved as a Worm Thrall. Your soul is mine; I intend to study both to learn more about the source of your power." He will then conclude with: "Power, my dear friend. I seek power, and so I acquire and study those who have some degree of it. We are after the same things, your guild and I. Yet you worry about 'good' and 'evil' and do not accept they are manifestations of the same thing. So you brand me a villain, and make vain attempts to destroy me. I watch, and I wait, and I collect you when you come for me. Instead of drawing Traven out, I have received you instead. Perhaps I shall personally go and collect him when we are done here." He will then turn hostile and proceed to attack you.