The ingredient Imp Gall is primarily collected from dead Imps.

Imp Gall is also one of only three ingredients which can be used to create a Cure Paralysis potion. At journeyman level it can be combined with Milk Thistle Seeds; at expert level Viper's Bugloss Leaves also become available. There are no negative side effects from combining any of these three ingredients.

During the Fighters Guild quest More Unfinished Business you are asked to obtain 10 samples of Imp Gall and deliver them to Aryarie.

2 guaranteed samples can be found in the following places (magenta crosses on map):

Imp Gall is collected from dead Imps, including Sparky and Frostcrag Spire's Vault Guardians. Imps are most frequently encountered as randomly generated Monsters. They are low-level creatures and therefore they are easy to find early in the game, but become fairly rare at high levels. In Monster Dungeons (circles on map), they are normally found from levels 1 to 10 (except when generated by mixed animal/monster lists, in which case they are found from levels 5 to 15). Outdoors (squares on map), they are found in every terrain except Farms and Plains. In the wilderness they appear starting at level 3 and can be found up to level 11-14 in most areas; along roads, they only appear in Hills and Valley terrains, starting at level 1.

Places where imps can be found at high levels include: 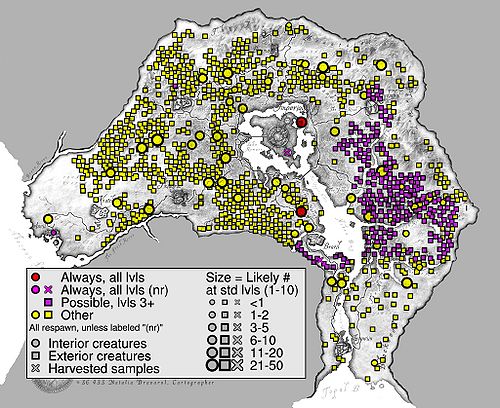