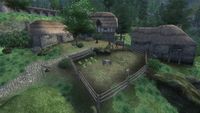 The village is not very large, having only three homes. At the south part of the village, there are some crops that Deetum-Ja and S'mirra can be found working at during the day. These crops include tobacco, radish, potato, and carrot plants. Life in the village had been relatively peaceful until the villagers began to see mysterious lights coming from a nearby cave. Some villagers went to investigate these lights, but they never returned.