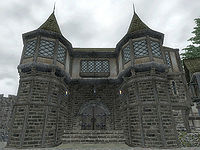 Francois Motierre's House is a house situated within Chorrol's Great Oak Place district. The house itself is neighboring the local house for sale as well as the inn, The Oak and Crosier, and is somewhat adjacent to Vilena Donton's House.

After completion of the Dark Brotherhood quest, entering his house in Chorrol is still not considered trespassing and you are therefore free to use Motierre's bed on the third floor. The entrance features stairs to the second floor on both the east and west sides. Behind the east stairs a small area contains a table with a loaf of bread, a chest and a shelf with drawers that both hold clutter, and a cupboard with drinks. On the opposite side of this level behind the west stairs is the door to the basement in the southwest corner. Next to the door, on the west wall, a table is set with a bottle of Tamika's West Weald Wine and a pumpkin, along with a non-respawning grain sack. In the northwest corner, three crates and ten non-respawning sacks, along with two food barrels, lie among each other. A set of shelves holds six ears of corn, four heads of lettuce, three pumpkins, three breadloaves, and three cheese wedges. The two nearby wine racks hold a total of twenty bottles of Tamika's West Weald Wine, eighteen bottles of Surilie Brothers Wine, and fifteen bottles of cheap wine.

On the second floor, an alcove on the east wall holds a chest and a desk, both of which contain clutter. In the northeast corner, three sapphires sit on top of a display case; if the case is opened prior to picking up the gems, they will fall behind the case and may be difficult to retrieve. In the southeast corner, a silver dagger lies on a set of shelves. In the southwest corner, behind the stairs leading to the third floor, a chest and three sacks hold more clutter, while a smaller non-respawning jewelry box behind the chest may contain jewelry (possibly enchanted) and/or potions. A display case nearby holds a copy of Mysticism.

At the top of the stairs to the third floor, a table is set with a piece of mutton and a redwort flower. The table in the southwest holds another bottle of Tamika's West Weald Wine and a bottle of Tamika Vintage 399. The table in the center holds a copy of The Brothers of Darkness, and the two drawers on either side of the south wall both contain clutter; a bottle of Cyrodilic brandy sits on one. On the north wall sits another clutter chest and a chest of drawers with clothing. In the southeast corner, two more clutter chests sit alongside a clothing cupboard and a set of shelves that holds a fine steel shortsword. On the floor lies a highwayman's shirt, a red velvet garment, green velvet shoes, and gold trimmed shoes. The double bed lies on the east wall, with a clutter chest nearby. In the northeast corner, two tables sit on either side of a chair; one holds only a cheese wheel, the other a bottle of ale and a bottle of mead.

On the first level of the basement, a bench in the southeast corner holds four ears of corn and two heads of lettuce. A food barrel lies beside an open-top barrel on the south wall, and a pumpkin sits on top of a clutter barrel near the doorway to the lower level. On the lower level a non-respawning chest that can contain armor and weapons sits next to the kegs. A bench holds a basket with five heads of lettuce, and a sixth lies on the floor. A non-respawning grain sack sits nearby, and the shelves hold a bowl with three onions. Two more non-respawning grain sacks sit in the northwest corner. In the southeast corner a table holds a loaf of bread, a cheese wedge, and an iron war axe. A non-respawning chest that can contain gold and jewelry lies in the southwest corner, with three pears scattered nearby. The four wine racks on this lower level hold a total of sixteen bottles of cheap wine, ten bottles of Surilie Brothers Vintage 399, nine bottles of ale, and seven bottles of Surilie Brothers Wine. The remaining containers in the basement (thirteen barrels, eight non-respawning sacks, seven crates, two chests, a shelf with drawers, a cupboard, and a covered bowl) all contain clutter.