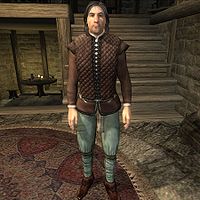 Francois Motierre is a Breton commoner living in Chorrol who has evidently made some pretty powerful enemies. He has been targeted by assassins from some unknown underground group, and he hires the Dark Brotherhood to fake his death in order to escape from them. 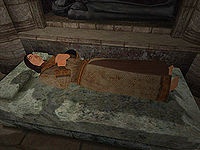 Before you have even committed your first murder, Francois will be found wandering around his house 24 hours a day, never eating nor sleeping. If you break in and approach him, he will mention somebody named Lachance and act like a coward: "You... You're not the one Lachance was talking about! Please... Please, don't kill me! You can take anything you like, then just leave!" If you approach him again, he will repeat: "Please, just take what you want and leave! I won't call the guards, I swear!"

Francois's attire consists of a quilted doublet, doeskin shoes and a pair of green silk garments. He also carries the key to his house and a small amount of gold.

When Dark Brotherhood contract-giver Vicente Valtieri hands you the contract for The Assassinated Man, he will explain that this assignment is a bit unusual: "You must go to the city of Chorrol and break into the house of Francois Motierre. Inside you will find Motierre waiting for you. Do not kill him! You see, Francois Motierre is a marked man. He owes a considerable sum to the wrong kind of people. So, they have sent an enforcer to kill him. Here. You will use this specially poisoned knife to stage Motierre's death, in the enforcer's presence. Motierre himself will provide more details. This is an unusual contract. Motierre had to make a special arrangement with us before it was approved. I trust in your professionalism." When asked about this “special arrangement” Vicente will describe Francois’ sacrifice in order to save his own skin: "The Dark Brotherhood is not in the business of staging deaths, no matter how much gold is offered. Sithis demands blood, and blood must be paid. In order to accept the contract, we demanded a life. Motierre offered his mother, and we accepted. Lucien has already taken care of that... detail."

In Chorrol, the concerned citizens have noticed the odd behavior of Francois: "Francois Motierre hasn't left his house in days. Hasn't come down to the tavern, refuses to have visitors. I think the man's gone batty." Once you have broken into Francois’ house, you will find the marked man wandering restlessly around his house, eagerly awaiting your arrival. When you enter, he will actively seek you out; "Oh! Well... um, hello. You must be the one Lucien Lachance told me about. I've been expecting you. We haven't got much time, I'm afraid. I borrowed quite a bit of gold from some underworld types. I... I missed a payment. Now they don't even want the money. They say I insulted them! They've sent an enforcer to kill me! His name is Hides-His-Heart, and he's on his way here now! That's why I hired you! So you can fake my death!" He will then break off and you can either choose to let him continue, or play hard; if you choose the latter, he will introduce his explanation with an apology: "Oh! Sorry! Please, I'm sorry!", but in both cases, he will explain what needs to be done: "Well, when Hides-His-Heart gets here, I'll put on a little act. You'll cut me with your poison knife, and that vile enforcer will think I'm dead. You must then flee from Chorrol, and Hides-His-Heart must not be killed! That way he can go back and tell his employers I'm dead. If you wait a day my "body" will be put on display in the Chorrol Chapel Undercroft. You can come to me then and administer the antidote. Got all that? Good! Hides-His-Heart will be here any moment. Get ready! Oh, I do hope this works..."

Seconds later, the Argonian enforcer will knock on the door and whisper: "Motierre! I know you're in there! My employers are most displeased. I'm coming in and you can beg for your life. Not that it will do any good! Ha ha!" He will eventually enter and be understandably confused by your presence, while Francois delivers a most unconvincing performance:

Motierre! I am here to exact payment, in blood! You will... eh? Who is this?

Oh no! What am I to do! An underworld enforcer and a Dark Brotherhood assassin, both here to kill poor Francois!

The Dark Brotherhood? Oh, you have been a naughty boy, Motierre, haven't you? Stand aside, assassin! Motierre is mine! My employers demand it!

*Gasp* What's this? Oh, Dark Brotherhood assassin, please don't cut me with that wicked blade! It looks like this is the end of poor Francois!

We'll see who gets to cut you, Motierre! Let me show you how a real killer operates, you Dark Brotherhood mongrel! Defend yourself!

It is now up to you to fight the Argonian and to stab Francois with the Languorwine-infected blade. When you do so, Francois will fall to the ground lifeless.

Later on, in the undercroft of the Chapel of Stendarr, you will find Francois dead, wearing nothing but tan robes. When you administer the antidote, he will wake up from his sleep and provide a bit of important information he left out earlier: "Ohhh... I'm a bit stiff, but quite fine otherwise. Ah yes, the Undercroft. My family members are buried here, you know. Which... um... leads me to something I may have failed to mention before. My ancestors will see my "revival" as a desecration of their tomb. This Undercroft is... well... quite cursed. Any desecration will cause my ancestors to rise from their graves and defend their resting place. I can hear them coming as we speak! You must protect me... escort me to the Gray [sic] Mare where I can buy passage out of Chorrol! *Gasp!* Here they come! Oh my, Aunt Margaret! You are looking the worse for wear..." Francois will then follow you until you have disposed of his family and entered The Grey Mare. He will then approach you and express his gratitude: "Ah, the Gray [sic] Mare! From here I will be able to arrange for transportation out of Cyrodiil! You have served me well, assassin. Francois is forever in your debt! Farewell!" If you approach him again, he will repeat: "Thanks again, assassin. Your services have been invaluable. Soon I will find passage out of Cyrodiil, and be rid of those moneylenders forever!" The next time you talk to Vicente Valtieri, Francois will have left Cyrodiil forever. Meanwhile, Chorrol citizens can be heard saying: "You won't believe what's happened! Francois Motierre has been killed! Murdered by the Dark Brotherhood! It's true, I saw the body myself." and "I heard the most disturbing rumor. Someone told me Francois Motierre has been murdered by the Dark Brotherhood! It's not... It's not true, is it?"