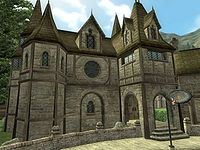 Chorrol Mages Guild is found on the north side of town, between the Fighters Guild Hall and Arborwatch. 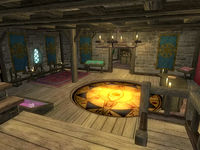 Directly across from the entrance to the Chorrol Mages Guild is the door to the Basement, below the stairs up to the Library. On the wall of the staircase is a display case with a flawless diamond and four greater soul gems containing a lesser soul each. In the alcove at the foot of the stairs another display case contains three empty soul gems – two common and one grand. The small display case in the southwest corner also contains a single empty greater soul gem. The table on the east wall holds two bottles of ale, a bottle of Tamika Vintage 399, a cheese wheel and a silver nugget. The display case near the southern door holds a copy of Mysticism. Teekeeus and Athragar can often be found in this room.

The door on the south wall leads to a room where Angalmo can often be found. On the counter across from the door are two empty soul gems – one petty and one lesser. The shelves behind the counter hold two calcinators, three mortar and pestles, three alembics, and three retorts. The respawning counter in the northeast corner contains apparatus, as does the one in the southwestern corner, which also has an alembic sitting on top. The display case on the west wall holds a copy of Origin of the Mages Guild, and the display case on the east wall holds three empty soul gems – two lesser and one grand – and two grand soul gems with greater souls.

The door on the east leads to a small room. The desk on the left holds a common book and/or clutter, and the cupboard on the facing wall holds food; both respawn. On the small bookshelf sits a cinnabar polypore yellow cap and a copy of the alchemy skill book A Game at Dinner. The large bookcase holds a copy of The Firmament and several ingredients samples – two green stain cup caps, two samples of garlic, a sample of tobacco, a clouded funnel cap, a leek, a pumpkin, and a rare sample of cinnabar polypore red cap – as well as two alembics, two mortar and pestles, a calcinator, and a retort. 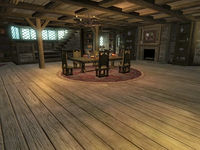 The Library is entered through the stairs leading up on the main floor. In the center of the large main room sits a dining table that seats six. On it are three hams, three samples of nightshade, two loaves of bread, a cheese wedge, a sample of ginseng, one of wisp stalk caps, and a steel-blue entoloma cap.

In the room in the northeast corner, the cupboard in the north corner holds food, as does the untied sack standing next to it. The cupboard on the south wall and the six barrels in this room - two in the west corner, two in the east corner, and two in the south corner - all hold food as well. On the bookshelf next to the cupboard sits three ears of corn and two cheese wheels. The two tied sacks on the east wall contain clutter, and the untied sack contains food. These sacks do not respawn; however, every other container in this room does. 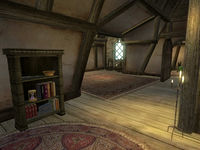 The door to the Living Quarters opens on a small alcove that contains a small bookshelf which holds common books, clutter, and a silver dagger. Another alcove in the north corner holds four barrels, two chests, and two sacks. The barrels each contain clutter and/or a repair hammer, and respawn. The chests also respawn, and contain clutter. The sacks also contain clutter, but do not respawn.

The locked door in the southeast corner reveals Teekeeus' small bedroom, with his single bed. The bookshelf in the corner is empty. The respawning cupboard contains clothing. The chest beside the cupboard does not respawn, and is empty.

The door on the northeast wall leads to a large room with a door on both the east and west walls. The east door leads to Alberic's small bedroom, with his double bed. The respawning chest next to it contains clutter, as does the chest of drawers in the corner. The cupboard also respawns, and contains clothing.

The door on the west wall leads to a small bedroom with a single bed that can be used by any Mages Guild member. The desk in the corner contains only clutter and/or a common book. The chest in the alcove on the wall contains clutter, and on the table in front of it sits two weak potions - one fortify willpower and one fortify personality - and two empty soul gems - one petty and one lesser. The bookshelf in the other alcove on the wall holds only common books, and on top sits four bottles of ale, and the bookshelf in the corner holds only more common books. Both the desk and the chest in this room respawn, and so are not safe for long-term storage. 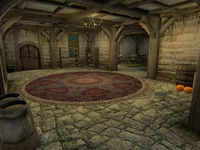 The door to the basement leads to a large entrance room where Alberic Litte can often be found. On the bench on the wall next to the stairs sits two heads of lettuce, two ears of corn, and two open sacks, each of which is non-respawning and contains food. The sack under the bench also does not respawn, and contains clutter. In the northwest corner of the room, two pumpkins sit on the floor next to an empty barrel. The two bookshelves in the southwest corner hold only clutter.

The open doorway on the west wall leads to a large storage room. There are two cupboards on the west wall - the northern holds clutter, and the southern holds food and/or drinks. The chest on this wall also holds clutter. Three barrels with clutter are clustered in the southwest corner. On the table on the south wall sits three heads of lettuce, a mandrake root, and a sample of wormwood leaves. In the basket next to the table are six potatoes. The bookshelves in the south corner hold only clutter, and the two tied sacks next to the bookshelf hold clutter, while the untied one holds food. The two barrels in the center of the room contain clutter and/or a repair hammer, and the chest that faces northeast contains clutter, while the chest that faces west contains gold and jewelry and/or clutter. This chest, and the three sacks do not respawn; however, every other container in this room does.

The door on the south wall of the entrance room leads to a large bedroom where Contumeliorus Florius can often be found. On the north wall, the chest of drawers holds clothing and the cupboard holds clutter. The bed on the east wall can be used by any Mages Guild member, and the chest at the foot of the bed holds clutter. The chest of drawers and the drawers on top, on the south wall, hold only clutter. The table next to it holds a bowl with seven strawberries and a pumpkin. The chest beside the bed holds potions. The desk and the shelves in the southwest corner holds only clutter. All of the containers in this room respawn, and so are not safe for long-term storage.