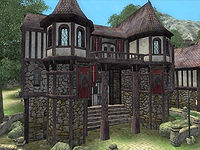 The Cheydinhal Fighters Guild is recruiting!

Cheydinhal Fighters Guild is in the west part of the city, between the Mages Guild and Magrum gra-Orum's house. 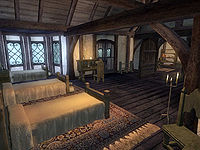 The top floor of the Fighters Guild Hall

The entrance to the Fighters Guild is directly across from a large fireplace. On the table next to it, a plate holds four potatoes. The area to the right, in the northern end, is a large dining room. On the table, which seats four, are three apples, two carrots, five blackberries, a cheese wedge, a bottle of cheap wine, and a bottle of Tamika's West Weald Wine. The cupboard behind the table contains food, and the wine rack next to it holds 12 bottles of Tamika's West Weald Wine, 4 bottles of Surilie Brothers Wine, and three bottles of cheap wine. The cupboard in the opposite end of this area contains dishes, and two apples and two ears of corn sit on top. The Fighters Guild Porter can often be found here.

The area in the southern end of the first floor holds four barrels which each contain clutter, possibly some iron arrows and/or a repair hammer. Two are in the eastern end, and two are next to the stairs leading up to the second level. The door to the Basement is under the stairs.

On the second floor are two more barrels with the same contents, and a bear pelt sits on top of the larger one. Next to them is a display case locked with a hard lock which holds two flawless sapphires, a pair of ebony ceremonial gauntlets and a ebony dagger replica. On the table in the eastern end sit six bottles of beer. The chest next to the candlestick in the corner holds only clutter, as does the one next to the bookshelf. The basket on the floor next to this bookshelf contains five more bottles of beer, and next to this basket is another clutter/repair hammer barrel. The bookshelf itself holds a copy of the skill book The Armorer's Challenge on top and another bottle of cheap wine rolled to the back of the bottom shelf. Keld of the Isles can often be found here.

The next door leads to a large bedroom with three single beds lined up along the northern wall. The desk on the east wall holds only clutter, but has a recipe for restore fatigue sitting on top. The chest of drawers in the northwest corner holds clothing, and the chest next to it holds gold and a possibility of jewelry and clutter. The chest of drawers next to the easternmost bed contains more clothing. The sack at the foot of this bed holds more clutter, as does the one at the foot of the next bed. The two sacks and the chest do not respawn; however, all other containers in these areas do. 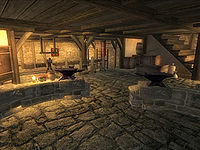 The basement of the Fighters Guild Hall

The lower level has a large practice area in the center. The cupboard in the north corner contains clothing. The two chests in the east wall can both contain weapons and/or armor. These two chests and the two sacks in the upper level do not repawn; however, every other container in this room does.