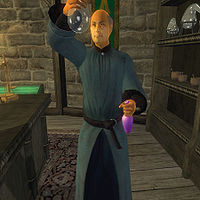 Angalmo, an Altmer alchemist, is an Evoker of the Mages Guild who offers bartering services and basic Mysticism training at the Chorrol Guild Hall.

After waking up at 7am, he spends one hour wandering around before starting his day's activities. If you are not part of the Mages Guild he will be found mixing up potions with his mortar & pestle. If you are a member, he will be found either reading a book from the Guild library or wandering around. He will perform any of these actions from 8am until 6pm, although he does take a break at midday to eat a two-hour lunch. Between 6pm and 9pm he will eat dinner with his fellow guild members in the second floor dining area. He will then spend the last three hours of his day, from 9pm to midnight, wandering around the guild building before he retires to his bed in the northwestern wing of the ground floor.

He has 800 gold and a Mercantile skill of 40. He will buy ingredients, potions, alchemical apparatus, and miscellaneous items from you, but sells only magical supplies. He will offer both his training and bartering services when not eating or sleeping.

He wears the standard mage's robe and a pair of doeskin shoes. He also carries his mortar & pestle, an empty grand soul gem, a Mages Guild key, and a leveled amount of gold. He doesn't wield any weapons, relying instead on a set of leveled spells from all of the magical schools.

When you address him for the first time, he will reply with these humble words: "Excuse me. My name is Angalmo. Can I help you?" If you ask him about the Guild, he will point you towards Athragar with the words: "If you need training, Athragar has a reputation for being very good with Alteration. You might consider speaking to him about it." Being an alchemist at heart, he will be most interested if you present him with a sample of Nirnroot: "Hmph. Ok, I'm stumped. If I had more time, I'd buy that off of you and bring it to Sinderion in Skingrad. He's the expert on strange plants. Perhaps you should take it to him. If any other alchemist can help you, he certainly can."

If you ask him about Earana while on the Chorrol Recommendation quest, he will tell you: "I passed her the other day. You wouldn't believe the look she gave me! Whatever happened, she's taking it out on the whole guild." On the elusive book both her and Teekeeus are looking for he'll drop you a hint: "I've heard rumors, but they're nothing more than that. Imperials trying to harness the power of the Ayleids... they're not fools." and "I still don't believe it's real. If it was real, you'd have some sort of proof, right? Well, I don't see any proof."