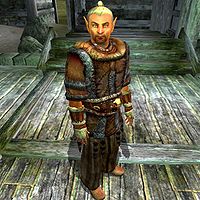 Aenvir is a Bosmer hunter and a former employee at Lelles' Quality Merchandise. Along with his colleagues Dranas Lerano and Storn the Burly, he has been robbing Lelles' store on a regular basis for a while; you are sent by the Fighters Guild to put a stop to it.

He does not exist in the game until you talk to Norbert Lelles about the break-ins. After that, he loiters outside the shop until it's time to break in, which is between 10pm and 4am.

Norbert will be quite surprised when you tell him Aenvir was among the thieves: "You've gotten them? Wonderful! But... their names are familiar to me. All of those men have worked for me! Amazing. I even trusted them to open up the shop in the mornings. I can't imagine what turned them to a life of crime."