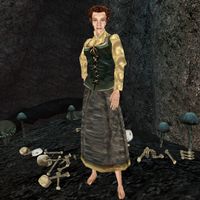 Ama Nin is a Breton healer who can be found in the caves beneath the Dunmer Strongholds of Berandas. You may encounter her during the Boots of the Apostle quest for the Imperial Cult. To find her, Levitate straight upwards from the area where you find the two winged twilights and the dead hero wearing the boots. She is on a ledge, high in the ceiling. Give her a Scroll of Divine Intervention, and she will disappear, leaving you with her enchanted blouse and skirt, and earning you a point of Reputation for your generosity. When you return to the Imperial Cult chapels, you will find out that she was actually an apparition of the goddess Mara.

"I'm SO glad to see you! I'm a healer, and I had been making my way to Gnisis from Ald'ruhn when these two winged twilights snatched me from the road, bore me into the air, dragged me deep beneath the earth, and stranded me on this high pillar of rock. I prayed to Mara for Divine Intervention. You must have been sent in answer to my prayers."
"So. Have you brought me a Divine Intervention scroll?"

"You haven't GOT a Divine Intervention scroll? But... I thought you were a servant of the Imperial cult? Surely the prudent and pious champion of the faith will carry Divine Interventions scrolls, both for personal use and for the aid of the less fortunate. Alas. I think you should go get a Divine Interventions [sic] scroll and bring it back to me so I can be rescued."
"Mara be praised! And you, too, for your forethought and compassion. Since you came prepared -- not just for yourself, but for other poor victims -- a scroll of Divine Intervention can carry me from this terrible captivity to the safety of an Imperial cult shrine. Please, give me that scroll. I don't want to be here a moment longer."

Give Divine Intervention scroll.: "Bless you, and all your endeavors. Farewell, and good fortune. But before I go, please -- let me at least give you a gift. All I have is this lucky change of clothes I've carried with me on my travels. I never wear them -- I just keep them as a good luck charm. Perhaps you can wear them in remembrance of me, and in token of your generosity to a stranger."
Keep Divine Intervention scroll.: "Woe is me. I prayed for aid, and received a cruel rebuff. It is enough to make one wonder about the gods. Perhaps they are evil and cruel, or careless and indifferent to the fate of poor mortals. Go, then. Leave me to suffer -- no doubt, as the gods intend."

"No. I haven't seen any boots anywhere. But... I do believe I saw the remains of some poor wretch down on the floor of the cavern where the winged twilights stand watch. I wonder... perhaps he was wearing the boots you seek."