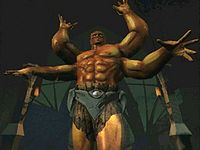 Clan Dagon is a Daedric clan led by Mehrunes Dagon, the Daedric Prince of Destruction. The clan is based in the Deadlands. Dremora Clan, Shardai Clan and Xivilai's Clan are all in the service of Clan Dagon.

During the Imperial Simulacrum, Dagon attempted an invasion of the Battlespire. The clanless Seducers were accepted into Clan Dagon to aid in this endeavor. However, the conquered realms left the clan overextended. Imago Storm of Dremora Clan disapproved of Dagon's acceptance of the Seducers and his tolerance of the antics of Faydra Shardai and Xivilai Moath, and viewed this as an unfortunate divergence from his otherwise prudent policies. Following the unnecessary invasion of the Shade Perilous, Storm allied himself with an apprentice battlemage from the Battlespire in order to restore Clan Dagon to its normal stability. He supplied the apprentice with the protection of Dremora Clan, along with the incantory neonymics of Faydra, Xivilai, and Dagon. The apprentice tricked Xivilai and successfully banished Faydra and Dagon to the Void, which allowed Storm to temporarily take control of Clan Dagon and relinquish its hold on several realms. This ultimately resulted in the destruction of the Battlespire.[1]