The Iliac Bay is an ample region in western Tamriel, according to the game manual it's about the size of the United Kingdom. Of course there is a wide range of regions and other places of interest throughout the bay, from landscapes to cities and towns to famous structures. Because of the immense dimension of the region it would be impossible to list every single place, but the following list, which hopefully will grow in size in the future, contains many interesting and notable places within this bay.

The Iliac Bay is a very large area, within which are a variety of locations to explore.

Dungeons
This generic category includes any location which is not immediately known to the character on his or her map. This does include all covens, the ancient and secretive sisterhoods who might summon the Daedric Princes - for a price. Some cemeteries are also included in this category since they are unknown to the character at the start of the game.
Settlements
These are the permanent dwellings of civilization. This broad category includes everything from cottages and roadhouses to the largest of cities. While the smallest of villages lack many of the services characters desire, the larger towns and cities are more generous. It is within these locations characters may buy a house or shop at the various markets. These larger settlements are typically walled, which may offer some difficulty to the character's entrance depending on the time of day. Some cemeteries might also included in this category since they are known to the character at the game's start.
Temples
Not all temples are located within a town or city. There are many wilderness temples to be found within each of the provinces. This category also includes the several shrines dedicated to the numerous Aedra, prophets, and heroes.

Dimensions of the Iliac Bay

Since the game's release, several have wondered how large the bay actually is. The following table gives an overview of the total number of locations found within the bay.

In addition, a mathematical formula can be used to estimate the area of the bay.

Daggerfall uses a clockwise three-dimensional coordinate system with the x-axis for the North-South direction, the y-axis for the East-West direction and the z-axis for the altitude. To the contrast of the usual procedure, the coordinate system's origin is not 0,0,0, for whatever reasons the developers had. In the usual game mode the actual coordinates of the player can not be checked. To enable this feature the line cheatmode 1 must be added to the Z.CFG file, which is located in the Daggerfall game directory. If this feature is enabled the player's location can be checked by pressing the F9-Key. This will display the player's location along with the currently active quests and quest flags. The location is displayed as follow:

Pressing the F9-Key once again will disable that additional information.

According to the maximum coordinates of the map the overall dimension of the Iliac Bay is:

The linear measure used by the game is very likely the imperial or survey inch, which is approximately 25.4 millimeters. Since the inch is a common linear measure in Anglo-Saxon regions and the player's character jumps exactly 10 units high, while standing, it is pretty reasonable to make this assumption.

Although Daggerfall possesses heightmap data, the game doesn't appear to render 3D mountains (excluding the 2D mountains which can sometimes be seen in the background skybox). This may be due to the noise bump filter added to the ground and the extremely short draw distance. However, it is possible to observe "mountains" at specific points in the game world, recognizable as sudden rises in the terrain elevation.

The first spot is on the Isle of Balfiera, as seen here: 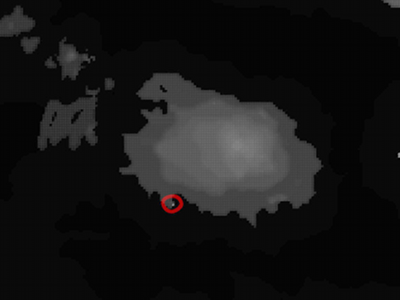 The second spot is east of the capital of Sentinel: 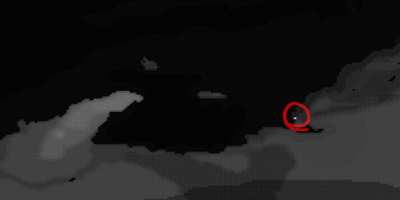